Oh the shame of having not updated the blog in over a year! I think I have a pretty good excuse. 😉

I said that something big would happen in 2016 and it did! In Mid-April I relocated to Seattle, Washington where I am now a UX Designer at Amazon Web Services. As you might imagine it’s a huge change both professionally and personally. It took quite a while to get settled with more things finally being out of boxes than in.

I used to describe my work in financial services as “dancing with complexity”. With the work I’m doing now, it’s like break dancing! As an aside, I attended the Information Architecture Summit (for the 10th year in a row!) and someone presented a poster on the information architecture of ballet and it got me thinking about my theory that someday, maybe 40 or 50 years from now, the common elements in breakdancing will become as codified as ballet became in the 20th century. We might think of breakdancing as completely freeform, and improvisation is a key element, just as in Jazz. But there is still a core structure at work. Anyway, it’s been great diving deep into complex systems again.

I am astonished how quickly this year went by. It’s been such a blur, I’ve neglected this blog. It’s a shame, ’cause it was an amazing year. I kicked off “conference season” attending Pro/Design at NASDAQ in NYC. Then spring brought IA Summit in Minneapolis where I presented a poster about wearables called “Anatomy of a Cyborg“. I took a few days off and hung out in Austin which is undergoing a remarkable transformation. With 200K more people since I left in 2008, it’s not such a small city anymore!

June brought me back to Minneapolis for the Eyeo Festival, to St. Louis for The Overlap and then to San Francisco for O’Reilly Solid. Then in July I had the pleasure of heading out to Arizona for Sketching in Hardware which took place, I kid you not, at Biosphere 2. And finally, because I apparently can’t get enough of Minneapolis, I went back once again in October for Inst-Int.

I’ve already been planning for next year which will include a return to San Francisco for the O’Reilly Design conference and I definitely will be at IA Summit in Atlanta and OpenVis Conf here in Boston. I am hoping to also make it to Helsinki for Interaction 16. Fingers crossed!

Nothing firm yet, but I hope 2016 will be filled with some big and exciting updates so watch this space or follow me on Twitter!

We humans like to celebrate milestones whether meaningless or meaningful. Here we have a new year. We’ve managed to travel around the sun again. A lot of people tweeted about how much 2014 sucked and that 2015 had better be better as if the universe puts brackets around years. I think the same folks said the same thing about 2013 and 2014. I shrug my shoulders. I just try to be better every day.

My own ambivalence aside, 2014 was kind of crazy. I ended up leaving SapientNitro and joining Mullen. I attended 4 conferences and presented at 2. I got a soldering iron and played a lot with microcontrollers, code and sensors. I supported several Kickstarters including one that resulted in meeting one of my favorite living filmmakers. I even started running regularly (albeit it very slowly) before it got cold.

I think 2015 will be more of the same. But, not just playing with physical computing, actually making some finished things. I want to improve my coding and building skills so that I’m at minimum a decent enough prototyper. I feel like I didn’t draw or write enough in 2014, so I want to bring that back into my daily practice. I want to figure out what my practice as an experience designer becomes as my focus and interests continue to shift toward emerging technologies. Who knows where that will lead me?

I just want to thank everyone at Midwest UX, and all of my friends and colleagues for the support these past several months. It’s been really awesome. And I am glad to close out the 2014 conference season with this video of my presentation: The Internet of Broken Things

I encourage you to check out all of the Midwest UX presentations on Vimeo. They are great!

It’s been so busy the past few months, I’ve posted nary an update! Midwest UX begins today in Indianapolis, IN and I am excited to be presenting on Saturday at 11:30am about the Internet of Things and how I created my connected home. I believe the conference is nearly sold out so if you’re not able to make it, there are some hashtags to keep an eye on: #mwux14 and for my talk, #iobt. It should be a great time!

I am thrilled to announce that I will be presenting a talk called The Internet of Broken Things at MidwestUX in October. It’s a great conference and I am really looking forward to it! Hope to see you there! 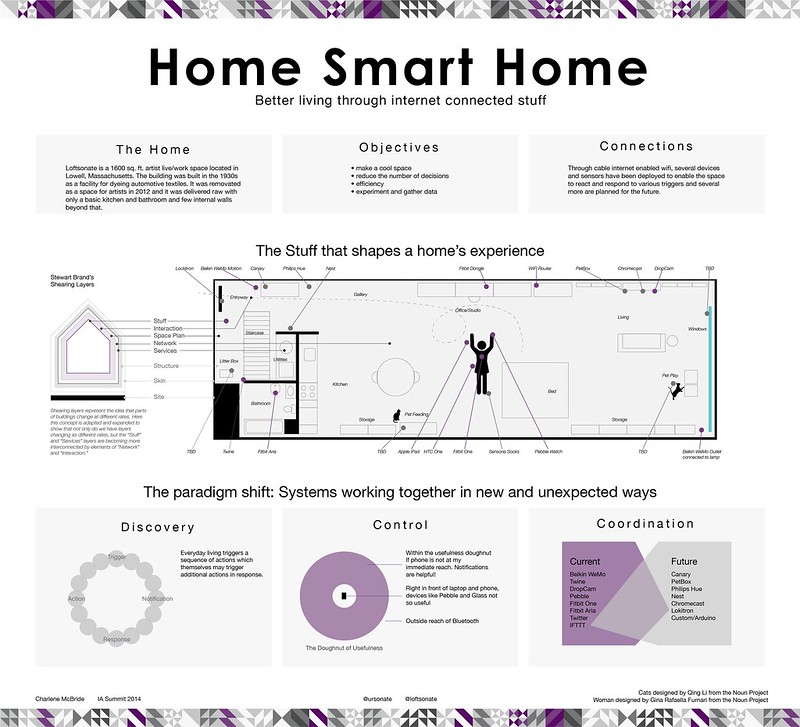 An amazing number of things have happened since I last posted:

I just want to take a moment and thank all you out there who’ve supported me the past few months. It’s really been an amazing time and there is much, much more to come!

So what’s next? I’ll be attending the Eyeo festival in Minneapolis next week! I’ve been wanting to attend since the first year so I’m really excited that I was able to commit to going this year. Will I see you there?

I made a little video to accompany my IA Summit poster on Friday. Enjoy!

Music from Bitwise Operator and is licensed under a Attribution-NonCommercial-NoDerivatives (aka Music Sharing) License.

I will be presenting a poster at the IA Summit Poster Night about the IOT stuff I have going on in my home. I’ve been looking forward to sharing this for a long time and can’t wait to get feedback from other designers. It gets even more exciting as I am hoping to build my first custom device this weekend at an Arduino workshop at Lowell Makes. See you in San Diego?

For the past 2 and a half years I worked for a great little company (actually, they’re quite big) called SapientNitro. Sadly last week my time with them came to an end. I was sad to see it end because it had been a long time since I’d worked someplace where every day I couldn’t wait to see what I was going to be confronted with, what my co-workers were going to say or do and how we all we excited with each new tech or cultural development that could somehow be morphed to help tell our client’s stories. There was something about that place that brought back to mind the excitement of the late 90s when this whole internet thing really became a thing.

And now there’s a thing called the internet of things. I hope that’s at least part of my story in the future. I think there’s so much possibility in what we wear on our bodies and how we interact within spaces. And if I don’t get to explore this for my daily bread, I have lots of ideas for personal projects.

Meanwhile, as I go over the rainbow, I am indeed looking for my next adventure and I am open to freelance opportunities either remote or in the Boston area. Contact me for details.