Note: This was posted on an older blog a few years ago. Thought I’d bring it over here for safe keeping.

I originally started writing this blog post in 2010 a couple of weeks after I got home from IA Summit. I remember being quite a bit angry. Well, maybe not angry, but annoyed. But then I got busy at work and put it aside, like most of my blog posts, unfortunately (or fortunately, depending on how you look at it.) Since then some people have spoken out a few times about the person who inspired this blog post originally and whether or not her contributions help or hurt the UX community and controversy erupted each time following the exact same pattern only more intensely:

3. people keep supporting her and giving her credibility because of….well no one really knows why

4. this is making the UX community look weird to both insiders and outsiders because in the real world d, e and f happen

And then some people respond with

6. how dare you attack her personally!

7. she’s done a tremendous amount to advance the community (noting no examples)

8. and my favorite: you’re just saying that because she’s a woman!

And then others respond with

9. you know what, i don’t know who any of these people are, but you’re right! I’m jumping on this bandwagon!

10. or can’t we all just get along? I’m jumping on that bandwagon!

So being that it’s a short week at my office and things are slow enough to take a few minutes to think about this, I am revisiting this original blog post because in the end, nothing has changed. I still feel the same way. So here it is, with the intent of talking about what I think we really should be focusing on…

[And just a quick note, I make references to icebergs, which is a metaphor that we see all the time, but it’s been so long since I started this that I don’t remember where I was going with it. Also please forgive the poor grammar and erratic capitalizations. It’s a sickness…)

The choice of the closing plenary speaker at the IA Summit was apparently controversial. I’m not sure where any of this controversy took place so all I can do is shrug my shoulders. It wouldn’t have been my choice and wasn’t up to me so ultimately it was a non-issue for me. a lot of people thought it was a perfectly fine and inspiring speech, and to them I say “whatever floats your boat”. For me, however, there was little there. It just sounded like last year’s talk which to me sounded like HR stuff which i generally tune out because it’s annoying.

Am I an oldtimer? I guess. I mean this is my second career. But it’s not about that. My immediate concern is that the talk was not something that I would feel comfortable sharing with a colleague, client or mentee to help them understand the state of the union when it comes to information architecture and user experience. I’m not saying that’s what it had to be. That’s just what I would have preferred. I could share it with my mom as a story of a young woman who talks about her feelings or my sister who hasn’t quite figured out what she want to be when she grows up. I guess I could share it with my hr dept. They like that kind of stuff. But when it comes to the how and why of what we do, where we’re going, where we’ve been, etc., it was irrelevant to me. It was like watching Oprah when I was expecting This American Life. Maybe I missed something (and I’m sure someone will clue me in). I’ve been reading everyone’s blog posts hoping to figure it out, but so far, nothing.

As a result, I’ve written my own plenary and for once, as I return to blogging after about 5 years (well, not quite), I’m going to share it with you.

As user experience practitioners, interaction designers, researchers, usability specialists, UI, engineers, interface designers and dare I say, information architects, we have the ability to make ourselves crazy very easily. With each interaction in life, we look for the shape, the pattern, the connections and meanings within. How many of you took pictures of the thermostats in your hotel rooms? How many of you spent a little too much time thinking about the way the shower knob worked only to realize it turns in the same direction as your shower knob at home? How many of you linger in the doorways with a raging inner debate about how that door should work? The way these things are triggered in our brains is what enables us to do our jobs so well. It is also the reason the community keeps getting caught up in the repeated debates over definiing ourselves, wireframes, rockstar-ism, service design or whatever flavor of the day is. It’s in our DNA as information designers and knowledge workers.

We redesign in our heads.

Every thought, every moment, every thing.

The question is where has it gotten you? How much have you moved that iceberg in the past year? We need have the ability to turn the volume down on some of out obsessions in order to progress.

[insert interesting meaningful things plenary speakers have said over the years, but i’m not going to ’cause it takes more time than I have right now]

And what are you getting from this conference and this community that will help you with your challenges? What are you giving to this conference and community? And isn’t it interesting that late in the day the seats that go first in any given session are the ones nearest to electrical outlets? Why haven’t conference spaces changed much to meet the needs of conference attendees? Where are we changing the world beyond the web?

Change is hard and constant and variable. It’s the only thing we really truly know is going to happen, but we don’t always know when and how. Writing your history at the moment of creation is a speculative effort at best. Slow down and watch how we all change. Now do you see the pattern? How about now? 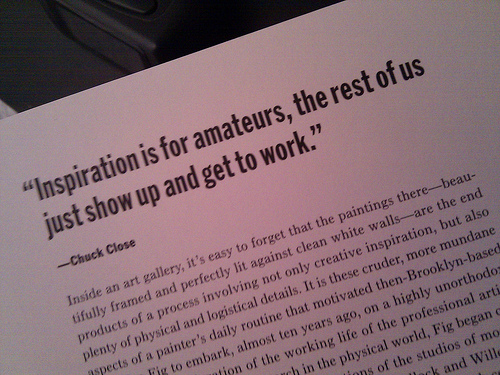 I am bothered by this oft repeated notion that we aren’t really designing anything. If that were true, someone is wasting a heck of a lot of money on me. Just because something is not atomic, physical or tangible doesn’t mean it doesn’t exist. If that were true, then abstract painting and conceptual art wouldn’t exist. All those naked folks standing around MoMA for nothing!

The experiences that we design are tangible, moving, inspiring, motivating, annoying, deceitful, illusory and everchanging. These are potentially living things. Potentially.

So my daily challenge is not getting people to give me a place at the table ’cause i’m already there. My table is the whiteboard where I struggle with new ideas or the conference room where I convince people to understand my vision. I can stand on my own two feet. My daily challenge is moving a mountain. it’s an iceberg, actually. and there’s a direction i’d like to see it go in not just to survive, but to prosper and grow. if it prospers, then i prosper. moving the iceberg seems easy enough when you look at it from up high. but a lot of it is under water and you just can’t see what the heck it’s stuck on. HR can’t help with that.

The problem with ux people is we hang out with each other a little too much. We’re like Hollywood when we should be a little more New York. (Or Woodstock when we should be CBGB) We should be fiercely independent. Guerilla. When I was in film school way back when, one thing I heard over and over that what made living in NYC so great was that the people you knew came from all different backgrounds, all different businesses whether it was finance, science, fashion or politics. In Hollywood, everyone is in movies or tv.

So ultimately, it’s about the work. Keep tabs of what we’re doing, of course, but be sure to stick your head out every so often and understand what’s going on in the world ’cause you never know what your next assignment is going to be or where it is going to come from. But you will have to learn it, understand it, design it and share its story with others.

Finally, don’t just go to ux conferences. be cross disciplinary. Read everything. Keep a journal or sketchbook. Go to conferences and events about topics you know nothing about. Or organize your own.

you learn to see by drawing.

and when you’re drawing, you’re thinking.

and when you’re thinking, you’re doing.

what do we do?

what do we create?

thanks, you can direct comments, criticisms and abuse to @ursonate on twitter